While writing the post that asked the who would have a better year, Sam Bradford or Nick Foles, I started to wonder if Foles would go down the road as Kolb, McNabb, and Vick. So I decided to revisted these former Eagles quarterback to see where they are now.

I want to start with Kevin Kolb who would replace McNabb as the starting quarterback in 2010.

Kolbe was drafted by the Eagles in 2007 in the second round.  He rushed three times in a regular season game Detroit that year.  In 2009, he started two games when starter Donovan  McNabb went down.  His starting role would last one year before be traded to the Arizona Cardinals. He remained with the Cardinals for two years before being release in early 2013. He signed with the Buffalo Bills, but he ended up on injure reserve after suffering a concussion during a preseason game against Washington. During the off season of 2014 he retired after being released by the Bills. Post-Concussion symptoms was the reason for his retirement.

Next up we have Donovan McNabb. 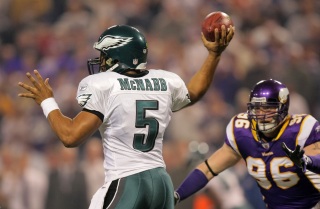 McNabb was drafted in the first round by the Eagles.  Under McNabb, the Eagles won the NFC east four times, five NFC championships, and loss their only Super Bowl appearance 2005.  In 2010, he would be traded to Washington after 11 seasons as an Eagle.  McNabb would then be traded in July of 2011 to the Vikings only to granted a release in December 2011.  He officially retired as an Eagle in July 2013.

Last we have the controversial Michael Vick.

Vick was the first pick of the 2001 draft by the Falcons.  He would remain with the Falcons until 2007 when was released after pleading guilty for his involvement in dog fighting.  After 21 months in prison, he would be reinstated in the NFL with the Eagles in 2009.  In 2013, he would sign with the Jets, and in 2015 he signed with the Steelers.  As of this writer he is still a Steeler.

So out of the three former Eagles quarterbacks only Michael Vick is still playing, but has changed teams twice since leaving the Eagles.  The other two have retired. All three quarterbacks have played together in 2009, and Andy Reid coached all three.

With a track record of one out three former quarterbacks still playing in the NFL, which path do you  think former Eagles’ quarterback follow?

The Rams quarterback is Foles to lose.  Just because he is a former Eagle that does not mean he won’t remain a Ram as long as he choses.